Here you can find the interview with Rubinum’s President, Mr. Lau Andersen, where he explains Toyocerin’s situation: the interview

List of published studies supporting the safety of Toyocerin:

Description of Bacillus toyonensis sp. nov., a novel species of the Bacillus cereus group, and pairwise genome comparisons of the species of the group by means of ANI calculations. G. Jimenez et al./Sytematic and Applied Microbiology 36 (2013) 383-391. (Available upon request)

Comparison of procedures for the extraction of supernatants and cytotoxicity tests in Vero cells, applied to assess the toxigenic potential of Bacillus spp. and Lactobacillus spp., intended for use as probiotic strains. A.R. Blanch et al. / Journal of Microbiological Methods 103 (2014) 64–69 (Available upon request)

Validation List no. 155 byThe ICSP (International Committee on Systematics of Prokaryotes: body that oversees the nomenclature of prokaryotes, determines the rules by which prokaryotes are named and whose Judicial Commission issues Opinions concerning taxonomic matters, revisions to the Bacteriological Code).List of new names and new combinations previously effectively, but not validly, published: click here

The use of a porcine intestinal cell model system for evaluating the food safety risk of Bacillus cereusprobiotics and the implications for assessing enterotoxigenicity. M. Trapecar et al. (2011) APMIS 119:877-884(Available upon request)

Bacillus cereus var. toyoi NCIMB 40112/CNCM I-1012 (B. toyo ) (TOYOCERIN®) was authorized for the first time by the EU Commission in 1994 for use use as feed additive in sows, piglets and pigs. Subsequently, it was also authorized for use in poultry, cattle and rabbits.

In December 2001, the Scientific Committee of Animal Nutrition (SCAN) concluded that Toyocerin®:

In 2009 Toyocerin was determined as “Generally Recognized as Safe” by the US GRAS Expert Panel (see GRAS Certificate).

In October 2012, EFSA FEEDAP Panel adopted a Scientific Opinion concluding that the strain of B. cereus in Toyocerin®:

Based on the EFSA’s Scientific Opinion above mentioned, the European Commission adopted the Implementing Regulation (EU) No. 288/2013 of 25 March 2013 concerning the suspension of the authorization of Bacillus cereus var. toyoi as feed additive for use in all target animal species.

However, the same Regulation states the possibility to provide supplementary data concerning the safety of use of Bacillus cereus var. toyoi that bring new elements to allow a re-consideration of the assessment carried out for that additive. 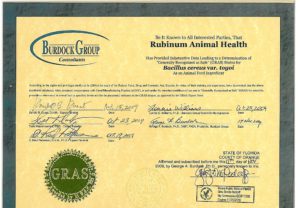 In July 2014, after reviewing additional data submitted by Rubinum in Dec’13, a new opinion of EFSA again stated that B. toyonensis has the capacity to elaborate functional toxins and thus, to pose a risk to humans exposed to the organism, and that it poses a risk for the spread of genes coding for resistance to tetracycline & chloramphenicol, antibiotics of human and veterinary importance. (See EFSA Journal 2014;12(7):3766 [17 pp.]. DOI: 10.2903/j.efsa.2014.3766)

Since its first authorization in Japan in 1975, Toyocerin® has been used worldwide in animal nutrition for over 40 years without any known case on toxicity/safety ever reported by the competent authorities related to the use of Toyocerin® either at the level of the target species, personnel handling the product or environment.